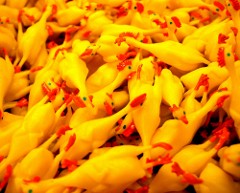 When Susan G. Komen for the Cure partnered with Kentucky Fried Chicken (KFC) on a “Buckets for a Cure” campaign, people were quickly, overwhelmingly appalled that a health cause would associate itself with unhealthy fast food.

It didn’t help that, in the same week that Buckets for a Cure began, KFC released its already infamous “Double Down,” an artery-clogging beast of bacon and cheese sandwiched between two fried chicken breasts instead of bread. Once again, the country was given easy reason to roll its collective eyes at Komen for associating itself and its cause with a company responsible for such unhealthy products.

It’s easy to deride Komen for blatantly ignoring their mission. However, Komen has argued that this could become one of the largest donations they’ve has ever received, money that could radically advance their mission. Komen also hopes that the campaign will educate a “different demographic” about the battle with breast cancer. But, at what price? Was the hit to their reputation worth the donation?

“Choosing a corporate sponsor for your nonprofit has tremendous potential to either help or harm your organization and its mission,” writes Nancy E. Schwartz. (Read her blog about smart marketing for nonprofits—and her outrage over the Komen-KFC partnership—at gettingattention.org.) “As I see it,” Nancy says, “Komen has undermined its own brand by partnering with KFC to market one of the unhealthiest foods there is—fried chicken in a pink bucket.”

Komen’s best bet is to embrace this PR crisis as a catalyst. This is the perfect time to create new criteria for choosing marketing partners—criteria that reflect Komen’s values—and publicly commit to those heightened standards. Donors, volunteers, and supporters want to hear from Komen that they learned from this experience and will align their corporate engagement practices with the values that drive their work. Right now their actions and their mission are at odds.

It’s easy to spot this turkey, but what about your cause? Are your values and practices in harmony? How might misalignment between your aspirations and your actions be exposing your good work to reputational risk?