Recently, Lightbox Collaborators Phuong Ly and Holly Minch worked with Educators for Fair Consideration on a branding process that culminated in the creation of a new name. In July, Immigrants Rising was born, invoking both the hope and determination of America’s undocumented young people. Executive Director Katharine Gin shares her insight about the process – including why strategic thinking around communications is key to success.

Why did you start this branding process?
It really all started with the need to overhaul our website. There was an initial feeling that revamping our website was a technology project, but then we realized it was really a communications project! 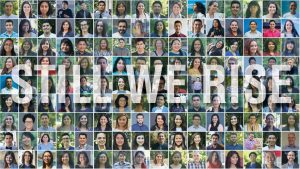 Until then, we had never really thought strategically about communications in our organization. We had significant mailing lists. We were interacting with people on social media. We were going out and sharing presentations all the time. We were obviously doing communications, but we really hadn’t thought about it from a strategy perspective.

And so that began a process of bringing on communications consultants to help us understand what the work was all about, and to think about how all these different components work together.

How did your name change come about?
I would say that we’ve known we needed to change our name for a long time, but we just couldn’t land on what was right.

There were so many challenges with our name. It was hard to remember. It was misleading. It was hard to translate. It was too long. Several years ago, at a staff retreat, we locked ourselves in a room and we said, ‘ok, we are going to figure out our new name!’ So, we stayed up into the middle of the night and we came up with a whole series of names. But in the end, everyone hated the new names more than the old name!

I think you just get to the point where you realize there are so many things wrong, but you really don’t know what to do. That’s why I felt like we really needed help from the outside. But even then, it took us many years. When we started this branding work with you all, we realized it might be possible to work a name change into a broader communications overhaul. That was exciting.

What feedback have you gotten so far?
Overall, it’s been super positive. ‘Immigrants Rising’ better reflects who we are and what we do. The creation of our theory of change a few years ago aligned our stakeholders and staff about the ‘why’ of our work. Now we have a name that helps others also understand the ‘why.’

When we announced the new name in July, we also launched a social media campaign where people shared personal stories showing the vibrancy of undocumented young people in our country. You can see that, despite the bad news, we can invoke hope. I think this is an era when people want to act, and when people don’t want to feel like they are stuck on the fence. There are a lot of people under attack, and we must stand up and do something about it.

‘Immigrants Rising’ is a name that is bold and optimistic and shows our confidence about the contribution and strength of people. It invokes Maya Angelou’s beautiful poem, Still I Rise. And I think that it feels good to have a name that’s really aspirational and inspiring, and to have people be proud of being part of something bigger.

Have there been any challenges?
One challenge we have had is moving more into the forefront! Because of the security risk in the current political climate, people in the undocumented community aren’t always comfortable being identified or spotlighted. Before our name change we were kind of an underground organization, and our name was like a code word for people in or close to the undocumented community. You could throw out ‘E4FC’ and people in the know would be like, ‘Oh, this person is an ally. This person is down.’ It also helped us approach organizations or institutions that were looking for information and advice but weren’t ready to take a stand and did not want to feel pushed in a certain way. So, now we have to figure out new strategies to work with a name that is less ambiguous and more political.

What lessons have you learned through this process?
For us, we really just needed to experience the pain for a while, to be willing to go through a fair amount of uncertainty about what was going to be on the other side. I think you might have to get to a point where you really are just so tired of people mangling your name, or you’re to the point where you don’t want to hand out any more fliers or business cards. I actually found myself not talking about my work because I didn’t want to have to say the name of this organization, which I co-founded!

So, it’s important to find a communications firm where you can build a genuine partnership and feeling of mutual respect to help with this – especially developing the strategy. There are also some things in the nonprofit world that we are conditioned to do the hard way – like it can feel like cheating to have someone help with writing! But it is actually really great to realize you don’t have to be on your own every single time. You can have help, and you can come out stronger and with more hope on the other side.