On the afternoon of May 29th, Starbucks will close approximately 8,000 stores for a training on racial bias.

The truth is that it’s hard for many of us who are white to grasp just how deeply steeped in racism we all are, which means sometimes we don’t know where to start, or we become defensive when we are confronted with our own racism.

After Starbucks made this announcement, a viral tweet posed the question, “On which day are we closing America for racial bias training?” 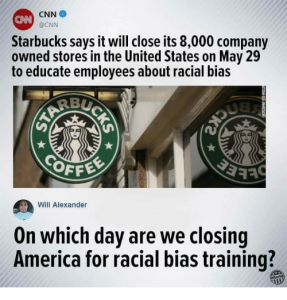 This was, of course, a joke, but it got us thinking: if we each took a half day to “deal” with racism in our own lives, what could that look like? What would we study, and which new ideas could we explore in service of the multiracial democracy we all crave? Clearly, this question will be answered differently by each person, depending on background and life experiences — race, of course, being a big factor, but not the only factor. We offer these resources to add to your toolbox, and we look forward to hearing your ideas.

To understand how whiteness works in America, listen to the Seeing White series on the Scene on Radio Podcast, especially Episode 13 and Episode 41. The series, based at Duke University, features the powerful work of Racial Equity Institute.

To better understand the mechanics of implicit bias, check out this episode of On Being with social psychologist Mahzarin Banaji, co-author of Blindspot: Hidden Biases of Good People and co-founder of the implicit bias research organization Project Implicit. As a white woman raised in a racist environment, I realize that I have many blind spots. In fact, we all have them, based on our experiences — and lack of experiences. Our challenge is to figure out where our particular blind spots are, so we can stop hurting other people out of our own ignorance.

Once we have acknowledged those blind spots, the next step is to learn how to be better allies to people of color. For tools to help in that endeavor, we recommend this article in Colorlines by Gabriella Cazares-Kelly, as well as this training on reversing racism, which is specifically geared toward white men.

Film and television also offer useful resources for stimulating conversations about race. Collaborator Amanda Cooper says, “Last month, my daughter’s school hosted a screening and facilitated discussion of Cracking the Codes. Our attendance was small, but those who came really appreciated it, especially the deft facilitation by Candice Wicks-Davis. It was clear some of the people in the room had participated in very few conversations about the realities of our racist history and the impact of our actions and institutions on people of color.”

Of course, books and authors also provide inspiration. According to collaborator Phuong Ly, “Sometimes, when I stall on exactly what I should commit to in order to make things better, I revisit Bryan Stevenson and what he calls ‘just mercy.’ He offers that we are each more than the worst things we’ve ever done, but that we must acknowledge history. This helps me navigate difficult conversations with family, friends, and acquaintances.”

When we are ready to move beyond intellectual pursuits, groups such as Showing Up for Racial Justice offer suggestions for framing issues of race and provide resources for starting your own local chapter.

In the interest of shifting power and resources — which is the end goal of anti-racist work — collaborator Isobel White is planning a small group discussion with other white folks around alternatives to calling the police. She will be using this resource list and this guide to “feel for the edge of our imagination” around not bringing the police into situations that might be managed more safely in other ways. And collaborator Anna Ghosh switched her money into the largest Black owned bank in the country, One United Bank, which is “working to build black economic power in America.” For more info and ideas, check out their blog and series of videos.

Of course, we know a half-day is not enough to counter centuries of racist policies and actions. But it is enough to look inward and commit to some outward solutions. 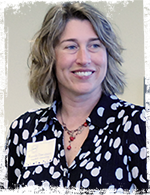 Renée Alexander wants to know what ideas you have to counter racial bias?