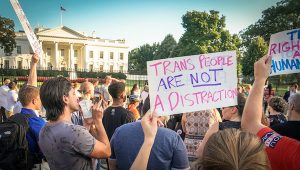 Earlier this week, Donald Trump made another in his series of misguided and cruel policy decisions when he banned transgender people from military service. One of the reasons he cited was the cost of their medical care. And now in order to protect the lives and livelihoods of trans people trying only to serve our country, advocates are making the case that the cost increases are minimal, but the fact that we have to have this argument is partially a problem of our own making. Anytime we argue that education is cheaper than prison or providing access to contraception is cheaper than abortion we are making a case that these decisions are about dollars and cents rather than what’s right and wrong.

When we do this, we contribute to the fixed pie fallacy, or the idea that any new gains must come at a cost, which is something that economists across the political spectrum have debunked. But rich people and the politicians they purchase benefit from this misunderstanding, so they’ve repurposed and franchised it to sell to people in fresh and disturbing ways.

It’s easy to understand how people can be lured into the false belief that jobs and money are scarce. At any one moment, there is only so much of each. But people inventing new things, creating new services, and even consuming new goods generates more money and more jobs. Yet for generations, politicians and employers seeking to keep us in competition have told us we can’t all have nice things. Sometimes they point the finger at “big government” confiscating from us, or at people who benefit from social safety net programs. And they charge immigrants with “taking our jobs” when new Americans are proven to generate more resources for all of us.

This slick trick is bad enough in the economic realm. But it’s by telling the same zero-sum story about free speech, religious practice, gender expression and other intangible ideas that the powerful keep us afraid and thinking we must compete for unlimited resources such as dignity, respect and love. The current administration assures us we must choose between the safety of refugees and our own. Apparently, peace comes in limited supply. The reflexive rejoinder of “Black on Black crime” anytime the topic of police brutality is mentioned suggests we can only address either civilian or police violence, not both.

By drawing from the same capitalist playbook, using racism, sexism and the slippery promise that you’ll be rich someday, people in power have been able to convince enough Americans that some people must hand over their freedom and humanity. They have turned equality into a form of capital by insisting the rights people currently have are in peril if we acknowledge the rights of anyone else.

This was crystal clear during the fight for marriage equality, as bigots warned heterosexual couples that their marriages would lose value if same-sex marriage were made legal. And part of what made that issue winnable was when states’ changed the law and people saw that marriage equality affected only the newly respected unions. It turns out, there’s enough marriage for anyone who wants it!

But still today, the calculated backlash to “politically correct” culture has convinced people that respecting others costs them something. We even use the language of “giving” with the concepts of “rights” and “respect” – as if these were objects to trade or retain. The myth of scarcity serves conservatives well. It primes desire for “cost cutting” and generates backlash to any expanded recognition of rights. But, sadly, the left has unwittingly helped promote this bunk narrative.

When we advocate for education spending by comparing the cost of schools and prisons, we imply that there’s a fixed pot of money to spend. While, obviously, we want schools and not prisons, this isn’t to avoid breaking the bank. Similarly, recent comparisons of the how much a border wall would cost relative to social programs don’t actually promote welfare. They reinforce false concerns about how little we have to spend. The reason to strengthen our social safety net or properly resource our schools isn’t because these are the cheaper among totally irrelevant other costs. They’re better choices – not better bargains.

Falling into the scarcity trap goes beyond presenting our case in cost-benefit terms. When we frame the most basic right to walk through the world without people suspecting and harming you under the banner of “white privilege,” we indicate that decency is a “special” treat and supplies are limited. While it’s clear that addressing racism requires that we redistribute the tangible spoils of white supremacy, safety, dignity and respect are things everyone ought to have in abundance. As economists would say, these are non-rival, non-excludable goods.

Even in the realm of our natural environment, where finite resources are a huge concern, research shows that reinforcing scarcity makes people less supportive of our policy solutions.

So how do we fight this scarcity mentality – at least in our messaging?

We must frame our problems based on what we truly seek to address, rather than setting up false choices that pay accidental homage to scarcity. When you talk about violence, don’t talk about how much cheaper it is to prevent rather than treat a gunshot wound. Talk about how there are more gun stores than McDonalds in California, for example. You aren’t attempting to argue that emergency services should be paid privately. You’re hoping to have audiences consider whether it ought to be easier to get a gun than a Big Mac.

We need to start talking about abundance. We need to remind our audiences that we—especially in the United States—live in a land of plenty. There is enough food, money and housing to take care of all of us. In fact, there’s excess. We need to not just say it, but to believe it.

We do what we do because we know there is a version of our world where everyone can have what they need. We can’t demand our politicians do what’s just and right by arguing that it’s less expensive. We can meet everyone’s needs with the resources we have; and we have an unlimited supply of care, compassion and dignity. We can’t let the peddlers of fear and hate who run our country obscure this truth. That’s how they turn us against each other. We need to invite people—starting with each other—to imagine a world where all of this is possible, because only then can we make it so.

LightBox Collaborative partner Amanda Cooper would love to work with you on campaigns and messaging that get us closer to the ideal of “everything for everyone.”

Anat Shenker-Osorio combines attentive language research with practical communication savvy to offer advice on how to make yourself heard, believed and understood. She’s a communications consultant and the author of Don’t Buy It: The Trouble with Talking Nonsense About the Economy.