LightBox Collaborative is delighted to continue our partnership with the Greater New Orleans Foundation to strengthen the work of their grantees, who are making the Crescent City and its neighboring parishes better for all. We’re pleased to share smart lessons from a few of the fantastic organizations we’ve met through our work in New Orleans—and hope you learn as much from them as we have!

Of the many issues and ideas that shape life in greater New Orleans, transit policy isn’t exactly the sexiest stuff. “Community engagement is vital to our work,” says Matthew Hendrickson, Advocacy Program Coordinator of  Ride New Orleans, an organization working to enhance the quality of life in the New Orleans region by promoting safe, convenient and affordable transportation options. “But when we’re talking about zoning and public investments in infrastructure it’s tough to get people excited, because it all sounds like bureaucracy to most people.”

That’s why Ride New Orleans doesn’t just tell people about the issues, they regularly show the importance of their work in action by creating fun, engaging events that people want to be part of.

Sometimes, the work of advocates is to create a vision of what’s possible, as with Ride New Orlean’s Pop-Up Transit Hub. “New Orleans has a hub-and-spokes bus systems that brings riders to central transfer centers—but tho 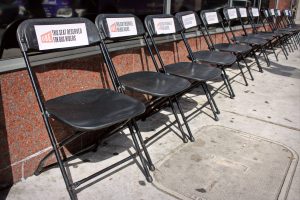 se hubs leave a lot to be desired,” says Hendrickson, “With no infrastructure for basic safety or comfort, people on their way from point A to point B are turned into loiterers, scattered across intersections while we wait. Instead, we imagine a more practical transit hub, with safer street crossings, seating for comfort and air conditioning to help transit riders weather our sweltering summers. We want to link people to our economic hub in safety and comfort.”

So that’s exactly what they did: for just one day, Ride New Orleans built a pop-up transit hub, using the art of placemaking to show what’s possible. They placed 200 chairs along the network of bus stops that collectively comprise the under-served heart of the regional transit system, giving transit riders a much-needed seat. Throughout the day, Ride New Orleans was joined by City Council members and the head of the Regional Transit Authority in calling for investment to improve conditions and create a thriving Central Business District Transit Hub.

By showcasing their vision of how things can be better, the event and related press coverage pushed the Regional Transit Authority to make immediate investments in improvements—including some seating and wider sidewalks for safer street crossing. The day of action also spurred commitments to a larger visioning process for future plans, including an analysis to determine the best location for a more permanent transit hub.

At other times, it’s the job of advocates like Ride New Orleans to clarify the consequences of poor policy and practice. For example, they hosted a “By Boat or By Float” party to save ferry service between New Orleans and Algiers after the Louisiana State Legislature voted to strip the ferries of their dedicated funding source.

“In New Orleans, it’s a cultural tradition to dress up and have fun, so we got creative,” recalls Hendrickson. “We asked people, ‘If you didn’t have this ferry, how would you connect to the city?’” 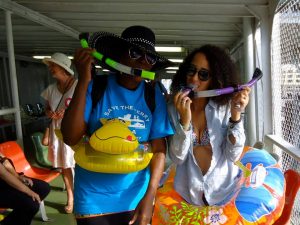 Ride New Orleans, along with key partners, threw a second line, where revelers followed a brass band to take a cruise on the ferry threatened with cuts. Everyone was encouraged to wear floaties, since that’s the only way they’d be able to get across the river if ferry services were discontinued. Some brought paddles; others, water wings and snorkels. Even though the topic was serious, the tone was festive and the event generated positive media coverage for the issue in both local and national media outlets.

“Because the ferry is such a unique way to get around—it’s a beautiful way to see the city and gives you a whole new perspective on New Orleans—we wanted to celebrate that,” says Hendrickson. “Because it’s more fun to commute in this unique way, and we wanted to show that it’s fun to be part of a community, joining with your neighbors to make the place you live better.”

Ride New Orleans offers two great examples of showing what you envision, and illustrating the consequences when that vision is threatened. Showing, rather than telling, is a key communications tool to set a positive, engaging, hopeful tone even as you make bold calls for change.

Holly Minch is the Founding Partner of LightBox Collaborative, and Greater New Orleans Foundation has engaged her to support advocacy grantees with communications training and coaching toward smart strategies for community change.