LightBox Collaborative is delighted to continue our partnership with the Greater New Orleans Foundation to strengthen the work of their grantees, who are making the Crescent City and its neighboring parishes better for all. We’re pleased to share smart lessons from a few of the fantastic organizations we’ve met through our work in New Orleans — and hope you learn as much from them as we have!

Hard to believe, but New Orleans City Council was once poised to pass a noise ordinance that would have turned down the 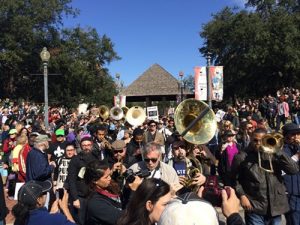 volume knob on live music in the city where jazz, blues and zydeco are among the most important cultural treasures. What’s worse, the ordinance would have treated any violations as criminal – rather than civil – offences, thereby criminalizing the musicians who keep the heartbeat of local culture.

Luckily, the Music and Culture Coalition of New Orleans sprang into action to defeat the measure, advocating in the interests of cultural preservation, perpetuation, and positive economic impact. “We want to build a political block for the cultural community,” says Ethan Ellestad, Executive Director of the Music and Culture Coalition of New Orleans. “When culture and music seen are as a problem that needs to solved as opposed to a resource to be celebrated, that’s not what New Orleans is all about. Music is part of our identity.”

The organization quickly mobilized musicians, street performers, venue owners, artists, lawyers and other advocates, craft-makers, traditional culture bearers,  small-business owners, urban planners, and concerned citizens, leading a second line to City Hall to demand better for New Orleans. “More than 400 people played, danced, clapped and sang our message: Music is not a crime.” City Council heard them loud and clear, pulling the proposed ordinance. Instead, the City has shifted over time to a public health approach to noise, focused on educating musicians and venue owners through its Sound Check Program.

The Music and Culture Coalition of New Orleans scored a win to keep music on the right side of the law, and are now focused on ensuring the laws work. “Our protest at City Hall got us a ton of press – national and international – and helped us build a reputation. And now our challenge is getting beyond that,” said Ellestad. “When the City shifted to a public health approach, we also shifted to ensure that didn’t lead to greater enforcement of the flawed laws on the books.”

In partnership with Tulane City Center, the Coalition published the Guide to New Orleans Street Performance, to educate musicians – and the enforcement agencies – about what’s allowed. “Listening to the cultural community, we’ve heard consistent complaints around the lack of clarity about the laws governing street performance,” noted Ellestad. “Typically, neither musicians and buskers nor enforcement agencies have a full understanding of the law, leading to misunderstandings, incorrectly issued citations, and, often, loss of income for performers.” The guide was designed to put a stop to these misunderstandings.

Like a great piece of music, smart advocacy strategies follow the issue, adapting as it develops. “We know this takes time,” said Ellestad. “And we’re focused on long-standing issues that require sustained advocacy and action,” Fortunately for New Orleans, the Music and Culture Coalition won’t be changing their tune any time soon.

Holly Minch is the Founding Partner of LightBox Collaborative, and Greater New Orleans Foundation has engaged her to support advocacy grantees with communications training and coaching toward smart strategies for community change.