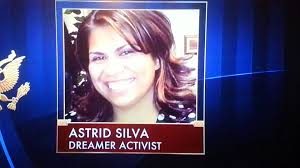 Every year, the SPIN Academy trains emerging activists to use the power of communications for social change. In this post, we follow up with one alum who’s done just that. Do you want to be next? Apply for this summer’s SPIN Academy by June 24!

The SPIN Academy has supported some serious social change luminaries. But perhaps the most famous SPIN Academy graduate is Astrid Silva. A graduate of SPIN Academy ’13, Astrid is a community organizer for the Progressive Leadership Alliance of Nevada. And in late 2014, she became a surprise sensation when President Obama cited her story as an inspiration for his executive action on immigration reform. The very next day, she introduced the President as he gave a speech in her hometown of Las Vegas. She published a national op ed thanking President Obama for his actions. She went to Washington, speaking to Congress in support of the progress to bring immigrant families like hers out of the shadows. The Los Angeles Times named her among New Civil Rights Leaders for the 21st Century.

We circled back with Astrid to see what her media fame has taught her, and to hear her insights for other activists.

What has this experience meant for you?

It’s definitely been a whirlwind experience for me and my family! It’s also been a demonstration of how we can use our own voices to fight for those we love.

What advice do you have for others who aspire to share their own stories for social change?

One of the most important things I remind myself through all of this has been to remember that not everyone will agree with your actions – even those on the same side. We are fighting a complex battle that will be won because of a wide variety of tactics.

My story is just one of millions, and that’s what it is – my story. Don’t let people discourage you from participating because you don’t fit the image that others want or what they think is the ideal. We each have a wonderful story to share that as a whole makes us so much stronger.

What professional development helped you prepare to share your story strategically to advance the movement?

I would say one of the biggest reasons I was able to share my story and to really make it my own was because of the help that I received from several mentors. As I started becoming involved, these leaders helped me understand how valuable my story was, even though for years I thought I was just another person who could offer nothing. I don’t think until much later I understood that they had helped me find a voice that I’ve always had – that each of us has!

And when I attended SPIN Academy, it highlighted those skills and really helped me focus on what I was bringing to a movement that is much bigger than me. I learned how ‎every brick builds a home. We may not feel like we matter, but without each of our bricks we would never be able to construct what we want. I also learned more in-depth the intersectionality of all our issues. At SPIN Academy, I was able to interact without technology, one-on-one with people who were fighting different battles than mine but were so similar and shared so many qualities.

What’s ahead for you? And what’s your call to action for others?

I encourage other people to share their story, too. I was immensely blessed in the amount of traction my story received. However, there are hundreds of thousands of people out there who have had struggles that I could never even imagine. I know that there are stories that need to come to the light. I have basked in the sun, in the freedom of not hiding in the shadows anymore and I want others to feel that warmth, too.

And of course, holding politicians accountable to our families! I started this for my family; along the way my family has grown and I will continue to fight for all of them.

Holly Minch, LightBox Collaborative’s founding partner, is a proud co-founder of SPIN Academy. She’s looking forward to her 17th annual communications summer camp August 25-28, and hopes to see you there.