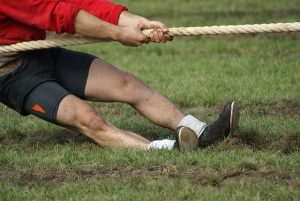 On many social issues, fear and empathy yank against each other in an emotional tug of war in the minds of our target audiences. But fear has serious evolutionary advantages over empathy – like a tug of war pitting Dwyane “The Rock” Johnson against Steve Urkel. This has big implications for the messaging strategies we develop on controversial social issues.

Fear is our brain’s way of keeping us (and our species) alive. This emotion is regulated in the amygdala – otherwise known as the “lizard brain.” It is responsible for innate reactions that we have about the world around us – especially things that might harm us. An overactive amygdala can shut down or limit access to the parts of the brain where empathy resides. The good news is that according to Roman Krznaric, author of Empathy: A Handbook for Revolution, 98% of humans are hardwired for empathy. But when the amygdala is activated, it’s very difficult for humans to empathize because of the negative emotional “noise.”

Case in point: The Lawyers Committee for Civil Rights of the Bay Area wanted to develop a persuasion campaign to convince employers to hire people with arrest and conviction records. Understanding what’s going on in the brains or our target audiences – and influencing that tug of war – was key to developing a successful messaging strategy. When we interviewed employers about the idea of being open to hiring people with arrest or conviction records, we could see the emotional tug of war play out in the ways they talked about the issue. On the one hand, they believed in giving folks a second chance. But on the other hand, they expressed concerns about the safety of their fellow employees and customers. Their aymgdala was helping them to imagine – even exaggerate – all the things that might go wrong by hiring a person with a record.

Our strategy to help calm the fear: To surround our target audience with familiarity. Neuroscientist Gregory Berns says, “Familiarity calms the amygdala.”

One source of familiarity that works well is shared values. So we developed a storytelling strategy that emphasized the values that our target audience holds dear – including giving folks a second chance and the value of a job and hard work. One story featured Michael Rachal, the pit master at Smoke Berkeley, a successful BBQ restaurant and Tina Ferguson-Riffe, chef and owner of the restaurant. Before starting at Smoke Berkeley, Michael served time for a firearm conviction. In telling their story, both Chef Tina and Michael echoed the values of hard work and second chances.

“When I hire someone, it’s looking into their eyes, trying to see who they are before I even hire them and that they want to work hard,” said Chef Tina. “We all need to work. We all need to make a living.”

Sharing what the job meant to him, Michael said, “Working here at Smoke Berkeley just turned my life around.”

Trusted messengers are another source of familiarity. It’s the reason that we prominently featured employers like Chef Tina as well as Mike Hannigan, co-founder and president of Give Something Back, a successful office supply company. Based on our audience research, we understood that our target audience – employers – related to other employers.

When testing our messages and stories among our target audience, one employer had this observation about hearing from other employers who have hired people with records: “It’s like jumping off a cliff into a lake. It can be scary to be the first person to jump, but once someone goes before you – and you see them land safely, it’s not as scary to make the leap.”

This insight perfectly summarizes the emotional tug of war – and how to give empathy a fighting chance.

Robert Perez is a LightBox Collaborator who helps empathy win out over fear on important social issues like LGBT rights, education equity and environmental conservation.