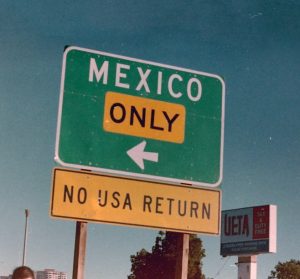 The LightBox Collaborative team is in Georgia this week, leading communications trainings as part of the 2014 SPIN Academy South. Organizations working for immigrant rights and their allies in the Southeastern United States are participating in this four-day, invitation-only residential retreat combining communications skills-building with movement strategy development.

Continuing the theme of “reframing” the refugee experience from our last blog post, we share this post by Melissa Moore and Julie Fisher-Rowe of The Opportunity Agenda, originally published July 5, 2014 on the Common Dreams website.

How we communicate on immigration greatly influences our course of action

by Melissa Moore and Julie Fisher-Rowe

Americans of all stripes take pride in our country’s reputation as a place of opportunity, and time and again migrants to the US prove crucial to our country’s economy, social fabric, and future potential. But the values we hold dear and our national rhetoric on immigration have sharply diverged—with dangerous implications for vulnerable children arriving at the border who need real solutions now more than ever.As the President noted when announcing his intention to use executive orders to bypass legislative gridlock on immigration, a broad coalition—including labor, immigrant rights groups, the business community, and legislators from both parties—supports stalled efforts to reform our problematic immigration policies, efforts that opened space for a positive shift in discourse around immigration in recent years.Unfortunately, the current furor over the dramatic increase in children from Central America seeking solace in the US has resulted in damaging regression in the immigration discussion, leading to a linguistic escalation that is fueling a militaristic response. As The Opportunity Agenda showed in our 2007 analysis of media coverage on immigration issues, previous descriptions of the border employed problematic immigrants as water metaphors such as being “flooded and inundated with waves of immigrants.” Our 2011 analysis of language around the debate, by linguist Anat Shenker Osorio, also revealed a tendency for opponents of immigration policy reform to rely on war metaphors with discussions framing immigrants as invaders and America under siege. The same study also found metaphors likening immigrants to animals or insects who “swarm” the nation and whom government agencies “round up” for return to their native countries.

The metaphors and language we use to discuss social issues reveals multitudes about both our conscious and our unconscious thinking on the issue. Examining the language of the debate, is therefore a critical step in understanding the general mindsets driving it–ours, our opponents, and the audiences and decision makers we must influence.So what does current discourse tell us? For one thing, we are danger of going backward. After years of positive stories and reports about immigrants’ contributions and advocates’ efforts to use language that speak to audience’s shared values, current conversations are taking a turn. Near-ubiquitous descriptions of the influx of child immigrants in the Rio Grande region as a “surge” parallels the language used to describe US military action in Iraq and Afghanistan, portraying vulnerable kids and pre-teens seeking refuge from extreme violence in their home countries as an enemy group to be combatted. Right-wing militias have put out a desperate call for their troops to amass on the border as if fending off a hostile invasion. The administration’s own characterization of the US Border Patrol’s response as a “surge” further underscores the militaristic response to what is undeniably a humanitarian crisis. The UN High Commissioner for Refugees has said that 58% of unaccompanied children arriving at the US border have viable claims to refugee protections under international law, yet our legislators and the press corps consistently refer to kids as “detainees”—a term most often applied in war.

This harmful and inappropriate language stands in direct contrast to President Obama’s own language about keeping the doors of opportunity open and reducing the “heartbreak of separated families,” values we know resonate with most Americans. However, the only specific policy change the President detailed involves the heavy-handed warlike tactic of moving immigration enforcement assets from the interior to amass on the border.

So if we can agree that immigration is not a war story, what story should we tell about the children we are finding at our door? First, we need to remind the country of the kind of values we associate with our responses to children: compassion, caring, and a responsibility to abide by our best intentions, not our worst instincts. Second, we need to tap into Americans’ pride in our “can-do” attitude. We have the resources and know how to do right by these children. We need to offer solutions that people understand and believe, and change the narrative from one of despair to hope. Finally, we must not fall into the trap of repeating our opponents’ narrative. Warlike language such as “surge” suggests that this situation requires a military response. Repeating opponent’s arguments only to refute them is still repeating those arguments and giving them airtime and space in our audience’s minds—it’s more effective to fill that space with our positive vision.We should remind our audiences of what this situation is about: children and families are being apprehended at the border. Common sense will tell you that solutions designed to address adults crossing the border do not and should not apply here. Draw people toward the obvious solution that we need instead to address the root causes of economic devastation and harmful conditions that drive children to make the perilous journey to the US on their own.

We need to ensure that while Attorney General Eric Holder and Homeland Security Secretary Jeh Johnson have been charged with providing immigration policy recommendations that can be enacted via executive order, we are moving sympathetic audiences toward supporting and addressing child immigrants’ safety and basic human rights.

This work is licensed under a Creative Commons Attribution-Share Alike 3.0 License.

Holly Minch is LightBox Collaborative’s founding partner and looks forward to a week of hard work and change-making moments at SPIN Academy South.