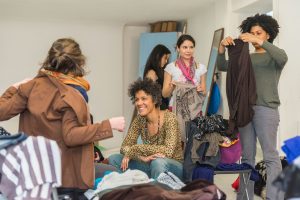 Earlier this year, Peers.org asked LightBox to help design a campaign that would showcase and celebrate the power of sharing. Since we believe that fun is the best way to draw folks into your campaign, we brainstormed ideas that would demonstrate what the sharing economy is all about while having a good time in the process. So where did we end up finding our most fun idea? As it turns out, it was tucked inside our closet.

Many of us have had the experience of gathering in a friend’s living room, surrounded by piles of clothes just waiting to become the perfect wardrobe addition. From this inspiration, PeersSwap was born, a series of home-grown clothing swaps around the world timed to coincide with the launch of New York Fashion Week on February 6th. PeersSwap brought Fashion Week off the runaways of the world’s top fashion cities and into our living rooms, modeling sharing as an on-trend opportunity to make fast friends instead of fast fashion.

The nuts and bolts of the campaign were pretty simple. Hosts agreed to open their homes to friends and neighbors who would bring clothes they no longer wanted to trade for “new” ones they’d enjoy. Hosts could invite people they already knew and Peers would also invite members in their area, so each party would be a blend of friends both old and new. PeersSwap was a fun and easy way to connect with neighbors and friends about the sharing economy—and get a “new” wardrobe in the process!

Take swap hostess Alessia Guardascione, for example. Alessia had recently moved to Caserta, Italy from Naples to live with her boyfriend. In looking for ideas for her housewarming party, she came across PeersSwap and realized that it was a perfect way to invite others into her new home. In the spirit of sharing, she also decided to engage in another way: she reached out to a few of her new neighbors that she hadn’t met yet and asked them to help her organize the swap. They said yes.

Joining Alessia on the PeersSwap Caserta team was Ilaria, an actress and theatre producer who was looking for new clothes for stage costumes, and Claudia, a copywriter and author of her own fashion blog. “We’re making a great team and we’re really enjoying organizing the event together,” said Alessia  “so much that we’re thinking about starting a series of event to promote the sharing economy here in Caserta.” After the swap, Alessia and team donated the extras to a charity that supports young women from other countries build a new life in Caserta.

By the end of the month-long campaign, more than 75 PeersSwap events had been planned in 60 cities throughout 20 countries. Shareable ran a piece on PeersSwap that includes some great tidbits, like the Providence, RI organizer who helped facilitate rides for those without transportation, or the swap in Bogota, Colombia where Twitter helped women who’d never met before come together. And in all, at least fifty bags of extra clothing were donated to charities like Goodwill, Dress for Success and Housing Works, in addition to countless local organizations like the one in Caserta.

The PeersSwap campaign is a great example of how movement building can be done through shared community experiences. Making people feel that they are a part of something bigger creates a new identity for them—one that includes thinkng of themselves as part of your movement.  In the case of PeersSwap, we built true believers of sharing by building a better wardrobe…what’s your idea for building movement via a shared community experience?

For some smart thinking on the subject, check out The Culture Group’s Making Waves: A Guide to Cultural Strategy that shares thoughts on using cultural strategy to help shift public sentiment, and The National Storyteller’s Network’s Storytelling and Social Change Guide that helps grantmakers (and others) use storytelling to advance social change. You can find a great blog resource at Culturalorganizing.org and if you are heading to Netroots this summer, consider attending their panel Agitation and Inspiration: The Power of Art and Cultural Organizing.

And of course, whatever you learn, organize or do, be sure to share.

Claudette Silver is a LightBox collaborator who wants to know what creative community experience campaigns you cook up.