Making a video can be one of the cheapest and easiest ways you can increase your exposure. That being said, creating a video can be daunting and seemingly complex; so here are a few things to think about that make creating a film for your organization more approachable. Let’s start with the subtle difference between telling a compelling story vs. laying some b-roll over interview footage; a nuance often overlooked when creating a documentary video.

The medium of video can be tricky. A video can be a bit like a poem; a less direct and more artistic approach is often more powerful. Most people like to discover things, audiences like being invited on a journey, they like a challenge that poses a question, the thrill of an unknown outcome and the adventure required to arrive at a resolution — they like a good video because it’s rooted in a good story.

1. Plan your story with research.
Start digging, be an anthropologist, play ethnographer, interview your subjects, listen to their stories; spend time in your subjects’ environment and you’ll be on your way to discovering the real people that have been profoundly impacted by your organization. These are the stories filled with conflict, tension, joy and inspiration that turn viewers into advocates.

2. Develop an Impact Story.
Avoid the autobiography video at all costs. Don’t waste your time on a series of self-congratulating quotes from your executive team; don’t interview your employees; the last thing potential donors want to hear is why you think your organization is so great. Your audience cares about the work you’re doing, not who you are. Show what you’re doing through the experiences of the people who have been impacted. During your research phase focus on a single charismatic character who can articulate an exciting, funny or inspiring experience that illustrates how your organization changed their life for the better.

3. Use the video to pose a question that invites audiences to respond.
Seek to engage them instead of talking at them. Think about the conversation your video will start. It doesn’t have to antagonize or create controversy; but think about the response you want to elicit. How will people react? Are you inspiring them? Are you motivating them? If they don’t want to leave a comment, call you up, send you an email or tell their friend when they’re done watching then re-think your story. 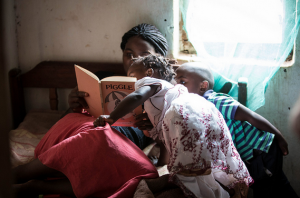 4.  Choose one person.
Employ a documentary-style approach to capture the success of your organization through the story of an individual who has been positively impacted by the work you are doing. Select a single compelling character. You only have 3 minutes to tell your story and audiences get confused when you introduce multiple characters. Also, don’t jam your video with back-to-back quotes. People forget how much is communicated through the visuals we see in a video. Select a few really powerful statements and give your audience ample time to digest them.

5. Use story guides to craft a narrative arc.
During the “ethnography day” begin to develop “story guides” that will help support the story your character has to tell. Focus on positive outcomes that were preceded by challenges or struggles and are eventually overcome by your character through the help of your organization. We don’t recommend pre-scripting the story, but using story guides is a good technique to stay focused while you’re capturing your story. What kind of challenges did your character face? How did they overcome them? How has it had a profound effect on their life? Think cinematically and as you’re developing the story guides ask yourself what are the activities that your character will do that will be most suited to beautiful cinematography?

6. Use breathing time to set the pace and tone of your film to tell a story that packs a punch.
One powerful technique that we’ve had tremendous success with is creating a video with the right proportion of breathing time. Similar to the way a good photographer pays attention to composition and negative space; a good filmmaker pays attention to breathing time. Very simply put, breathing time is the part of the video that doesn’t have any voice over or talking head. Don’t overload your story with words. If your story isn’t visually compelling then create a podcast.

7. Develop a media strategy for releasing your content.
There are a variety of approaches for disseminating your content once it’s created; approaching blogs and social media players who reach key influencers and target audiences is popular and effective. However, there are a few other reasons that creating a documentary style brand short works extra hard for you.

1. It can live on it’s own. If it’s created well, provides entertainment value and tells a universal story, then it has much better odds of getting picked up by outside media channels like Independent Lens, Vimeo Staff Picks and other content providers that are looking for interesting stories and great content.

2. It lends itself to creating a series, which helps your organization begin the journey of assembling a library of content. This is the best way to engage the people you want to participate in your organization’s story on an ongoing basis. It keeps them coming back to your site and lets donors see the results of their donations. It’s a nice compliment to the impact story and a tool for building loyalty.

3. Besides earned media and loyalty, the documentary film medium also works hard at making your organization more transparent, which is also emerging as one of the most valued ways to build trust with your audiences!

Photos courtesy of Truth Be Told

Ken Fisher is a creative director & founder at Truth Be Told creative, a documentary film and storytelling shop that focuses on nonprofits and socially responsible businesses. His work has been featured on PBS and a few of their clients include Aspen Institute, Marine Mammal Center & ClimateWorks. Their most recent work,  Family Planning in Malawi and Understanding Dispraxia, exemplify the strategies outlined above.