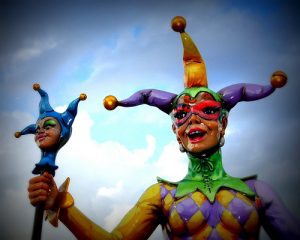 It’s been at least a couple decades since I played an April Fools joke, but this week I’ve been getting inspired. Maybe it’s because I have a 7-year-old who is surely gearing up to play her own jokes on me. Or maybe it’s because, as we note in the LightBox editorial calendar, April Fools can be a humorous hook for serious stories. You can use the date to point out how politicians try to fool us (no shortage of that right now!) or to pull off a message-driven prank.

So I thought I’d check out how do-gooders had made use of April Fools’ Day in the past few years — to highlight their issues, get new supporters on board, or bring a playful dimension to their often sober work.

For sheer scope and scale of the ruse, there’s no one more effective year-round than the Yes Men. They’ve created a hoax edition of the New York Times, declaring an end to the Iraq war. They’ve staged a fake press conference announcing Chamber of Commerce support for climate change legislation. And they’ve created the incredibly goofy SurvivaBall, a self-contained living system for surviving climate disasters.

But if your budget doesn’t allow for a Yes Men-size prank (or if you think your staff will crack up too soon and ruin the joke), there are still creative ways to make use of April Fools.

The Union of Concerned Scientists (UCS) created three spoof messages in 2011 to highlight the perils of climate change:

UCS sent the first message to supporters, and then gave them the option to share any of the three via social media or email. The result was a good bump in site traffic and increased social media buzz — and it’s still paying off a year later, with a mainstream press hit noting that Punxsutawney Phil could be out of a job if he doesn’t adjust to the new shorter winter.

Staff at charity:water showed their silly side by posting their April Fools jokes to their blog and sharing on Instagram – making the point that in addition to their critical work providing clean water to developing countries, they know how to have fun, too.

Missoula folks angry that major Missoula employers Macy’s and Smurfit-Stone had closed their doors — and laid off hundreds of workers right before Christmas — publicized their version of what these longtime employers should have done when they left town. They sent out a press release and blanketed Missoula with fliers about a completely fake “thank you Missoula” concert and gala event, complete with food and cash giveaways. You can read more about this prank and others in this Huffington Post article by Joseph Huff-Hannon and Yes Men co-founder Andy Bichlbaum.

And lastly, fellow LightBoxer Lauren Girardin pointed me towards an oldie but goodie cartoon from the archives at CompassPoint. The cartoon’s take-home message: make sure your April Fools joke lands right. If it’s too subtle, or simply makes people afraid, your message will get lost. Let on that you’re pulling your audience’s leg before they have a chance to get irritated.

Because the last thing April Fools’ Day is about is making people angry, right? Says the mom who’s sure to have a “kick me” sign on her back come 4/1/12.

So, what are you planning for April Fools’ Day?

Isobel White is a LightBox collaborator who can’t keep a straight face but hopes you can.