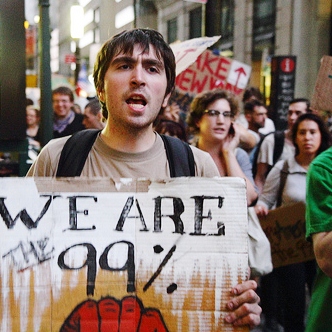 First there was no coverage of the Occupy Wall Street protests. Now there’s tons of coverage and it’s endlessly frustrating. The media keep asking, “What do they want? What are their demands? What will make them go home? Why zombies?”

Ok. I admit, quite a few of us are asking that last question.

But it’s really frustrating that it’s so hard for the mainstream media to wrap their heads around an action that is organic, loosely organized and not sound bite ready. Sure, there’s the rare reporter who gets it and some articulate protestors, but the media is mostly churning out crummy coverage that misses the point and dismisses the effort.

It’s as if most reporters can’t figure out something that anyone who has ever been in line at the bank can tell you: people are fed up with the lack of opportunity and the imbalance of power that has been brewing for years. It’s come to a head in a double-dip recession and a post-Citizens-United election environment — and so people have taken to the streets.

The issue is: there are issues

The problems manifest themselves in different ways for different people. Many can’t find a job that pays the bills. Some people have lost their homes. Others are doing okay right now, but are frustrated by the fact that if calamity befalls them, they know that Congress won’t bail them out.

The problems are as numerous as the protesters. But the through line is this: Where is our safety net? Where is our bailout? And when did our country stop supporting and — as it often seems — caring about people who are not ultra-wealthy or ultra-connected? There is no single demand or set of demands that can address that question. It requires a culture shift and a reorientation of our priorities as a nation.

Are communications professionals part of the problem?

And it’s my fault that the media can’t figure that out. Well, me and people like me.

Communications professionals have been helping nonprofits and grassroots organizers design winning media campaigns — with bullet point messages, concise calls to action, and prepared spokespeople. The media eat these campaigns up. We win some and we lose some, but when we do get coverage, the media usually has the story straight.

But by preparing so well and always giving the media what they want, the way they want it, have we rendered them unable to understand a grassroots movement without a central messenger? Media look for the single fact sheet that will answer all their questions about the Occupy Wall Street protests, and in this case there simply isn’t one.

When I see coverage like this, I usually want to jump in, develop the talking points, frame the story, and pitch it so the media can deliver it. But this time is different. I feel solidarity with the premise that there are far too many issues, too many problems in this country, and too many opportunities for solving them than should be boiled down to make Occupy Wall Street media-ready.

I am not sure if this means I am losing my edge or just finding the exception that proves the rule. Yet, I find myself feeling like I am part of the messy media coverage of this historic moment and wondering how I (and you other communications folks out there) can be part of the solution.

Amanda Cooper is a LightBox collaborator who recognizes she is one of the lucky ones in the 99% because she gets to do the work she loves and earn a living from it. For now.