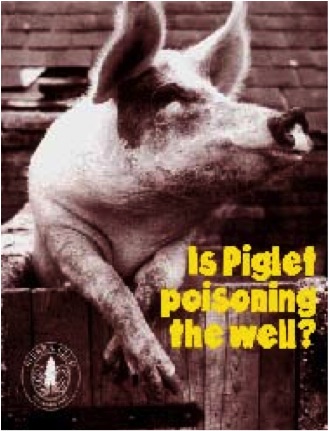 Inspired by this great photo essay which asks the deceptively simple question “Why do you do what you do?” I’ve been musing about the key moments in my career that continue to inform my work at LightBox Collaborative today.

Like the summer of 1998 when I accidentally roped the nation’s oldest environmental organization into a 10+ year campaign.

I was working in the press office of the Sierra Club, in Washington, D.C. Perhaps you recall the hot conversation topic in Washington that summer? Monica Lewinsky. All. The. Time. It was clear that the Sierra Club’s media strategy wasn’t gonna cut through the chatter unless it related to the impeachment of President Clinton.

We decided to look beyond the nation’s capitol, to turn our attention to issues surfaced by Sierra Club members. One of the major concerns we heard in states after state, all across the country, was the massive livestock factories dotting America’s rural landscape. So, we decided to do what any savvy, leading organization would do: issue a report!

The research for this report turned me into a real dud, full of gloomy facts. Livestock generated 2.7 trillion pounds of poop annually….The average mega-hog operation consumed 73 million gallons of water each year….The dairies of Central California generated more waste than the entire population of Texas….Oh, I was a real laugh riot at parties. But, eventually, the research was done and the report ready for release (much to the relief of my friends and family).

On the big day, I sat down at my computer to write the press release. I happily typed away until I realized that I had no headline. I had no news. Uh oh.

I wandered down the hall to the office of a senior colleague and asked, “What do you think if…we, um, called for a moratorium on factory farming?”

Coffee in hand, she barely looked up from her Washington Post: “Sure kid, sounds great.”

So that’s what I did. I sent a press release to the national media calling for a ban on the construction of any additional large-scale farms. The headline declared: “Sierra Club Declares a Moratorium on Factory Farming.” With a few strokes of the keyboard I picked a big ol’ fight with a strong, motivated, well-funded opponent.

While you may deeply value the contributions of your 23-year-old interns, I suspect you’d rather not see them setting national policy. Particularly not the kind of policy that will leave your organization on the hook for years and years of campaigning…and yet that’s exactly what happened.

Because the organization wasn’t clear on the goals of their communications in the first place.

We had a great communications product — a well-designed, well-researched report. But we didn’t know what we wanted that product to do for us. We didn’t have a clear outcome in mind. So we accidentally ran butt-backwards into a campaign.

That’s the problem I’ve spent my whole career since solving: strategic clarity. Who does your organization need to talk with? Why? How will you know if that conversation is effective? What’s the change you are trying to cause? How are you trying to change the world?

Holly Minch is LightBox Collaborative’s Chief Engineer. She wonders what mistakes you’ve made that turned out for the better?