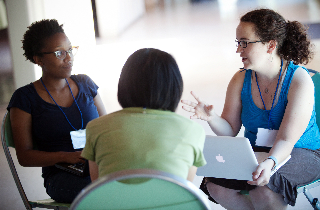 The 12th annual SPIN Academy is in the books. Dedicated social change activists gathered with expert trainers for some serious communications skills-building and networking. With an atmosphere that has been described as “summer camp for progressives,” we couldn’t have asked for a more fun event.

Last week was my eighth SPIN Academy, and my return as event organizer—Holly‘s been at it even longer, helping found the event back in 1999. Planning SPIN Academy reminded me what a privilege it is to work with people who are so passionate about their work. It also put me in a nostalgic mood, as I reflected on how dramatically things have changed—and what has remained the same—in the field of strategic communications.

The model of strategic communications that forms the framework of the SPIN Academy hasn’t changed at all: start by articulating goals, identifying audiences, and crafting messages that your audiences will connect with, then push those messages out using the tactics most likely to reach your audiences.

While strategic communications remains as relevant as ever, what has changed is the means to share those messages. When the SPIN Academy began in 1999, online communications was an emerging concept, not the essential tactic it is today. Social media wasn’t even a glimmer in Mark Zuckerberg’s eye (given that he was only 15 years old at the time).

This year, of our ten sessions, two were exclusively devoted to online communications and social media. Those topics also came up again and again, a necessary part of nearly every conversation.

It seems cliché to say that it’s the younger folks who really get this online stuff, but it was clear that our next generation participants had valuable knowledge to share with the more senior folks. It was remarkable to see the interplay between the youthful immersion in technology and the battlefield experience of those of us who are not getting any younger.

But not anymore. It seems that more organizations have internalized the importance of doing communications work and in doing it right. Our SPIN Academy participants are also simply more experienced than they used to be. So this year, all of our trainers had to step up their game to keep up with the sector’s increased skill. What a good problem to have! I’d like to think that the SPIN Academy has something to do with this.

The passion that our participants bring to SPIN Academy hasn’t changed a bit. When you bring a group of smart, funny, highly-skilled advocates for social change together, the mood is bound to be exhilarating.

The SPIN Academy remains an important, unique event in the field of strategic communications for nonprofit organizations. And I still feel very, very lucky to be a part of it.

Heath Wickline is a raconteur at LightBox Collaborative. He is looking forward to training more progressive activists at SPIN Academy 2011.