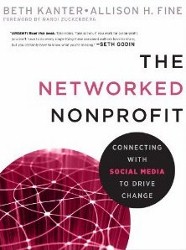 Beth Kanter and Allison Fine have received a lot of praise for their new book, The Networked Nonprofit

, and they deserve it. The technical term for its contents, in fact, is “an embarrassment of riches.”

From stories to help reluctant executives see the benefit of social marketing to real-world examples of how others became networked nonprofits, the book is packed with useful information. Among the highlights:

Kanter and Fine don’t shy away from the legitimate questioning of social networking’s utility for nonprofits. In fact they make this point in the book’s conclusion: “What, if anything, does all of the clicking, blogging and ‘friending’ add up to in the end?” It’s a good question.

It’s no accident that Peggy Padden’s story is front-and-center at the beginning of this book—nonprofit leaders have spent entire careers thinking about where the funding they need to fulfill their organization’s mission is going to come from, and so it’s not surprising that fundraising would be high on their list of reasons to try social media. But, perhaps even more intriguing for nonprofits is how online social networks enable reputation economies.

Reputation economies are simply sets of transactions—information shared, actions requested and taken—where it’s someone’s reputation rather than their wallet that’s facilitating the transaction. They’re not new, of course, and neither are social networks, but both phenomena have been enabled, systematized, and made transparent by the internet.

When someone looking for the best cup of coffee in town heads to Yelp, or asks their Facebook friends for music recommendations, they’re participants in a reputation economy. The reputation of the recommender—whether it’s the friend with indie rock cred or a stranger with Elite status on Yelp—is connected with what action is ultimately taken by the asker.

An individual with a great reputation on social networks can get more friends. A corporation can have all the friends in the world, but if those friends don’t buy their products, they won’t be in business for long. A nonprofit, on the other hand, can find volunteers, solicit donated service, and ask their friends to support legislation related to the organization’s mission. A networked nonprofit can do all these things by building the right kind of reputation through social media.

A truly savvy networked nonprofit might even be able to achieve the remarkable feat of turning all of those friends into donors, a process Kanter and Fine further explore in Chapter 10.

is a remarkable book, and while it certainly won’t be the last word on social networking for nonprofits, it represents the state of the art in 2010.
. . .

Heath Wickline is a raconteur at LightBox Collaborative, currently working hard on the finishing touches for the SPIN Academy, being held later this month.