The SPIN Academy is near and dear to a couple of LightBoxers’ hearts. I helped found the event back in 1999 and Heath worked on it for a half-dozen years. Between the two of us, we’ve been involved in all 11 Academies to date. That’s why we were so excited when the board of the Communications Leadership Institute, which houses the SPIN Project, asked LightBox Collaborative to run this year’s event.

What is the SPIN Academy? It’s a four-day retreat that teaches the fundamentals of strategic communications to progressive activists from around the country. 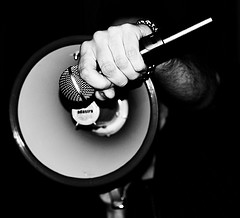 It was almost 15 years ago when I graduated college and became a “professional activist.” During my first years of trying to change the world, I was a union organizer, agitating workers who were desperate for change. As a researcher I investigated industries that poisoned our environment and tracked campaign contributions to their obvious corporate sources.

Eventually I grew so frustrated with what I was seeing in the world that I decided to pursue communications so I could let the world know what was happening and agitate for change—easier said than done.

I looked into graduate schools for communications. I took adult education classes to learn about writing press releases and pitching reporters. I volunteered to pick up whatever communications work organizations had for me to do. At one point I even threw up my hands and thought about infiltrating the corporate world to learn how they did public relations so effectively.

Despite my best efforts, I was unable to find what I needed to make the key transition from knowing what was wrong with the world to being able to persuasively tell the world what could be done to fix our problems—unable, that is, until spent a week at the annual SPIN Academy.

I now seize every opportunity I find to send a young activist to the SPIN Academy, whether they’re pursuing a career in communications or not. The more people who understand how communications is vital to winning real change, the better chance we have to win on the issues we care about.
. . .
Paul Karr currently lives in the Washington Heights neighborhood of Manhattan and is a Senior Communications Officer for the Change to Win labor federation.